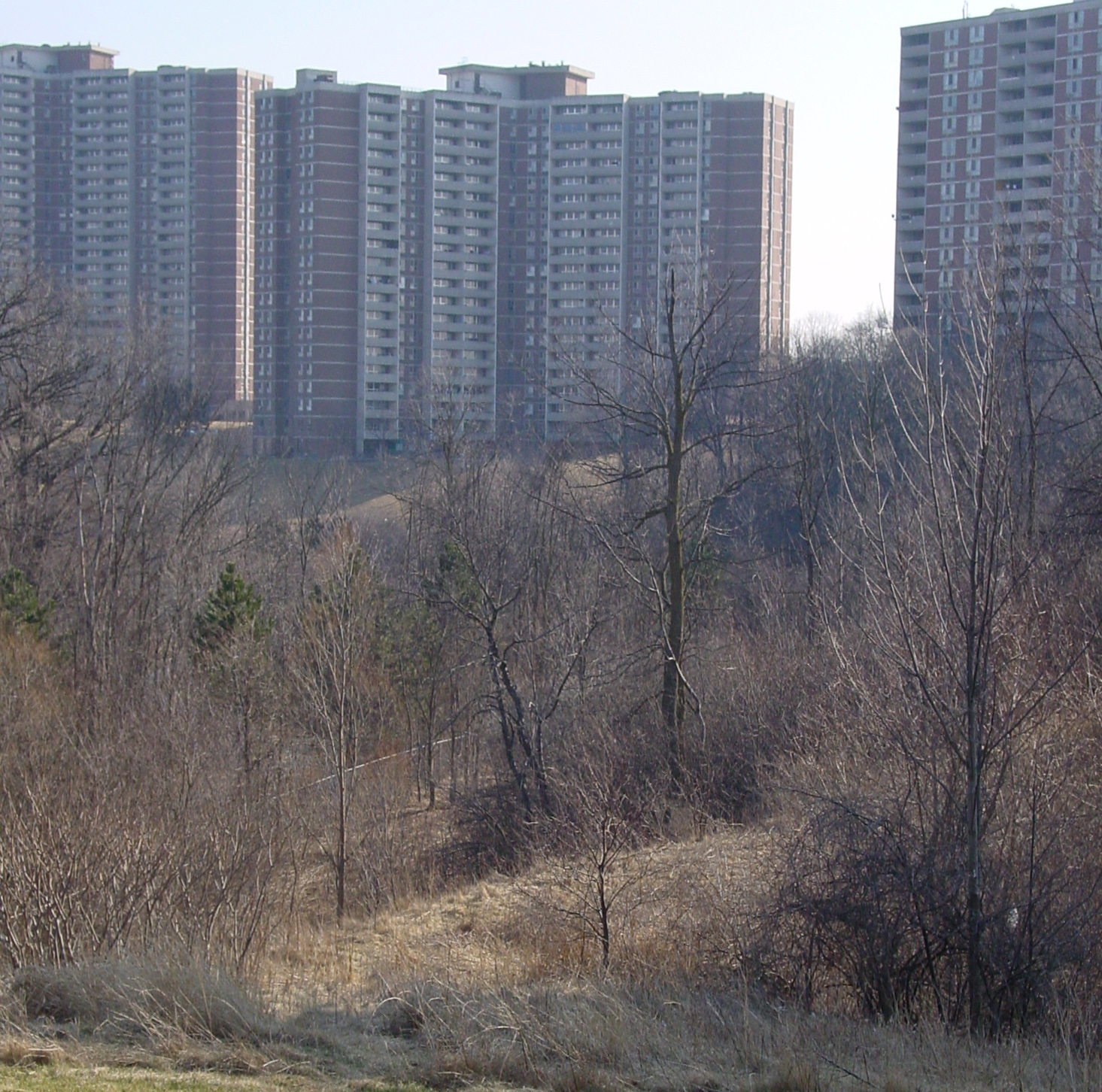 High-rise apartmens at Kipling and Steeles in north Etobicoke, overlooking the Humber Valley

Take a stroll down Kipling Avenue, just south of Steeles, and you’ll see a row of grand towers overlooking the Humber Valley that house the equivalent of half the population of Toronto’s Annex neighbourhood within a few blocks. A total of 19 towers in all are home to roughly 13,000 people in this northern Etobicoke community, enough people to make up a small town. When governments express the importance of encouraging intensification to prevent suburban sprawl, this is the kind of city-building they’re talking about. At least in part.

The difference here is that much of the green space that surrounds these buildings is fenced off from neighbouring properties and often sits empty and unused. What’s more, a couple of small strip malls are all that is within walking distance for residents in need of amenities, including service centres and community hubs where people can linger, share ideas, build plans and seek help. Despite the density, getting around by car, for those who have one, is still the most convenient way to travel.

The cluster of towers at Kipling and Steeles is not unique – especially in Toronto, which, some may be surprised to learn, contains the greatest number of high-rise buildings in North America outside of New York. The good news: Toronto is a world leader in achieving the kind of density that helps curb sprawl, with over 1,800 high-rises more than 12 storeys tall. The bad news: most of the city’s residential apartment towers, built in the ’60s and ’70s, are in desperate need of repair, while the neighbourhoods they reside in suffer from poor planning and years of neglect.

Most of Toronto’s tower neighbourhoods lie outside the downtown core, are difficult to reach by transit and are off the radar of many of the city’s planners and movers and shakers. When it comes to Toronto’s quest to become truly sustainable, however, its tower neighbourhoods are where some of the biggest differences can be made. Going green here goes well beyond turning off the lights and convincing people to trade in their car for a bike. It means encouraging investment in long-ignored communities to create healthy, vibrant and environmentally friendly neighbourhoods.

This is the message a forward-thinking young architect named Graeme Stewart has been touting to anyone who’ll listen for well over a year now. And as it happens, one of the many people who have been listening has been Mayor David Miller. Working for E.R.A. Architects (in partnership with the University of Toronto and the city), Stewart manages E.R.A.’s Tower Renewal Project, which aims to retrofit aging apartment buildings to cut their energy demands in half. Ongoing research at the University of Toronto by Dr. Ted Kesik and Prof Ivan Saleff, which began in 2002, predict a huge carbon cutting potential.  “We’re aiming for a 60-per-cent-plus reduction in CO2 from these buildings,” Stewart says. Done on a large scale, “that’s taking a huge whack of carbon out of the city.”

But rather than simply renovating the buildings, counting up the vast amount of greenhouse gases that were cut and leaving it at that, Stewart and his ever-growing number of partners are also hoping to find ways for tower property owners, local residents and the city to work together to bring vibrant street life, much-needed services, well-used public spaces and new jobs to their communities.

Enlisting the help of others – including the mayor, city agencies, the University of Toronto and even the Clinton Foundation and the – has proved easy. Instead of focusing on the overwhelming problems that plague many of the city’s tower communities, Stewart highlights the myriad opportunities to make a real difference.

“When you talk to people from Atlanta or other places about how to fix these huge regions, they’re always lamenting about how to install high density, but we already have it, it’s there,” Stewart says. “For us, it’s more about how to make it work, rather than how to create it.”

If you think today’s condo boom is out of control, compare the 18,000 units built in the Greater Toronto Area in 2007 to the 30,000 apartment units that came onto the market in 1968. Back then, these new, mostly suburban towers were considered the height of modernity. Like many of the sleek glass condos being constructed today, their target market was middle-class singles and couples looking either for a first home away from home or a quiet place to retire. (One ad Stewart found showed a silhouette of a man playing the grand piano in his upper-floor pad.)

Unlike the towers built today, however, in the 1960s, most developers adhered to the “tower in the park” model, which left residential high-rises surrounded by a liberal amount of green space. A number of those towers sprouted up in what were once farmers’ fields, marking the beginning of many of the post-war communities that private developers painstakingly designed south of Steeles from Etobicoke to Scarborough. 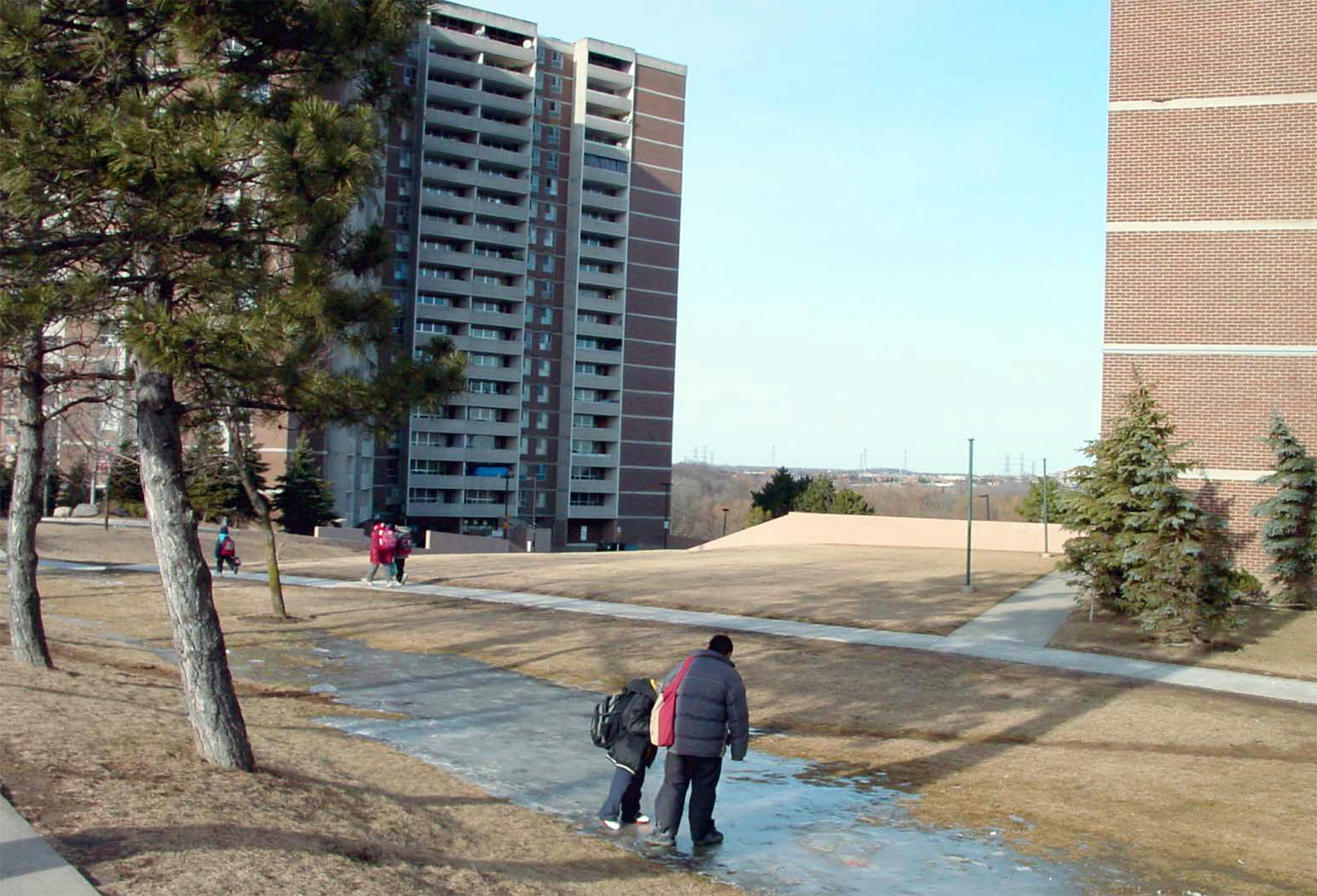 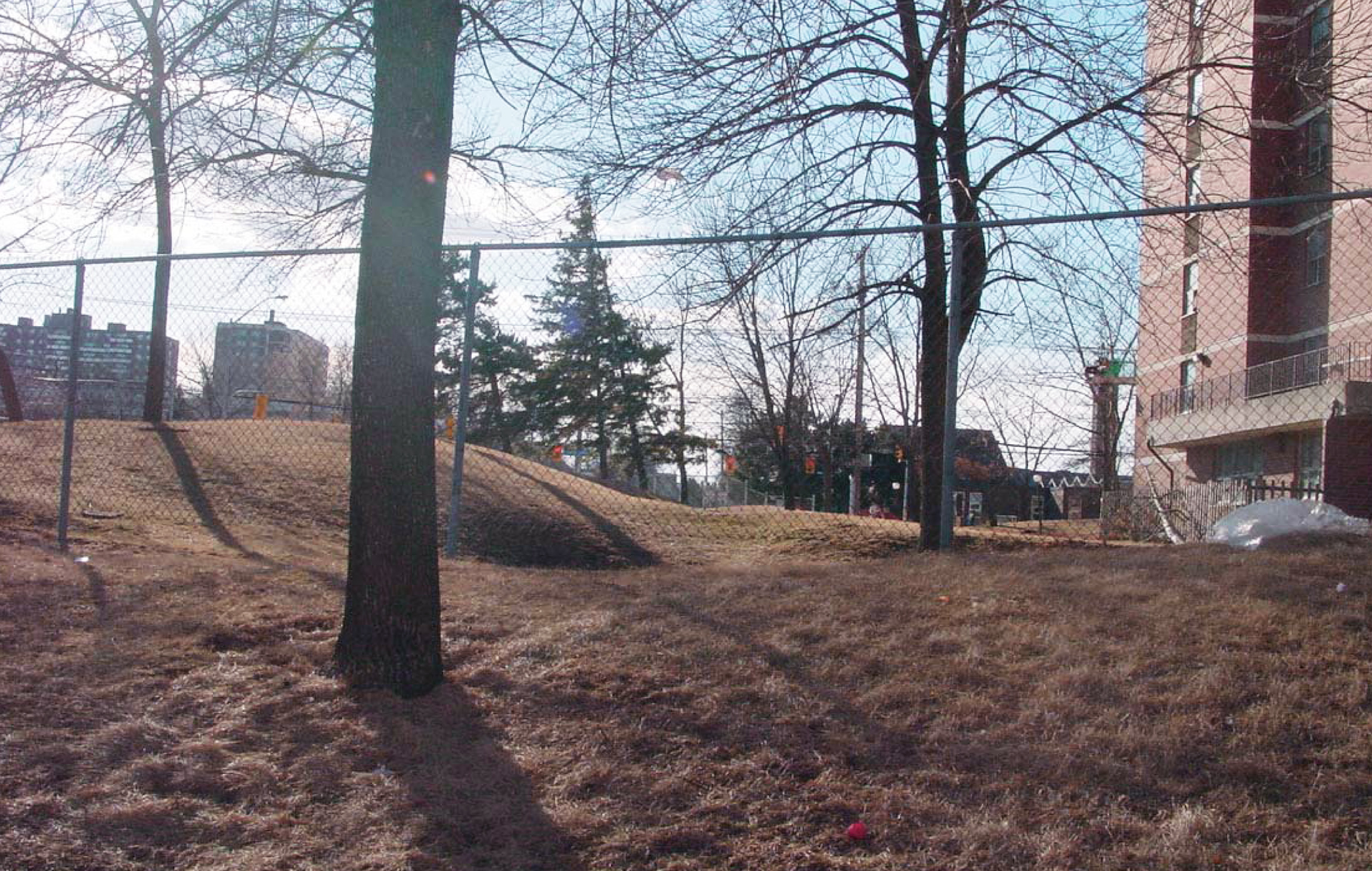 Though at first glance the ample green space sounds like a nice idea, much of it has been cordoned off and left unused, like at Kipling and Steeles. Attempts to build large-scale mixed-use communities, such as Thorncliffe Park, were often left unrealized when funds eventually ran dry.

Since then, the aging buildings and neglected neighbourhoods have become hubs for low-income housing. Compare a map of Toronto that shows where most of these towers are located to a map highlighting the city’s 13 priority neighbourhoods (those identified by the city and the United Way as being most in need of increased investment and support) and the correlation between the two is hard to miss.

“The question is: how do you take a cluster of towers that isn’t working properly and make it into a self-sufficient community?” Stewart says.

The conscientious architect’s research took him to tower communities in other cities across the world, such as Moscow, where he found former “dead zones” similar to those that surround towers here brought to life with retail plazas, kiosks, bicycle paths, farmer’s markets and new street furniture. Stewart soon began to wonder why similar changes couldn’t be brought to Toronto.

“The next step is going to the community and actually working with people about how to achieve these goals in terms of their vision for their communities,” Stewart says. Involving local residents – whose neighbourhoods, though similar in structure, vary culturally depending on the community – is a key part of the project. Residents in Scarborough Village say it’s an opportunity they would welcome with open arms.

Nayla Rahman of the Scarborough Village Neighbourhood Association (SVNA) would like to see better lighting and a formal pathway constructed between two strip malls in her neighbourhood and Cougar Court, a cluster of towers that sits just to the north of the retail complex. She and fellow SVNA member, Erik Naskali, say some of the changes that Stewart has suggested are already making a difference in their community. A farmers’ market sponsored by FoodShare that comes twice a week to Naskali’s tower’s courtyard has made it easier for the local residents who live there to buy fresh food. In addition to giving him the opportunity to “get his hands dirty,” the plot of land Naskali tends to in a nearby community garden has brought him in closer contact with some of his neighbours.

Oddly enough, Toronto’s Official Plan, the overarching document that determines where new development can happen in the city, stands as a roadblock to inviting change. The city’s planning bylaws state that intensification, be it commercial or residential, should only happen along the city’s major avenues – all other neighbourhoods should remain stable.

“I would argue that not encouraging any investment [in these neighbourhoods] – because we’ve been seeing them as stable when they are clearly not – has just been hurting them,” Stewart says.

This could soon change. In the next couple of months, Mayor Miller will bring forward a communication to the executive committee that lays out the different facets of the Tower Renewal Project and the role that the city could take, says his point person on the environment Mary MacDonald. Miller’s report will include recommendations for the executive committee to consider that could “really jump-start the action.”

“Make them self-sufficient communities – you can get your groceries there, you can have health centres there, you can go to the doctor there,” say Stewart. “The basic argument is that if you can make these buildings less energy intensive and build things around them that will support the people living within them, then you’re starting to create a sustainable city.”