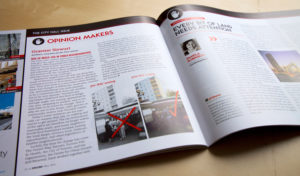 The fall issue of Spacing Magazine features a short piece by ERA’s Graeme Stewart in a section called “Opinion Makers.” The article reviews Toronto’s history of residential tower development and explains the evolution of the new RAC zone allowing new program and land use in our apartment neighbourhoods. Read the full text below:

The GTA’s mid-century Apartment Neighbourhoods help give the region an urban form unique to North America, reflecting progressive ideas that were considered “smart growth” in postwar Canada. Yet while built with progressive ideas about density and suburban growth, these neighbourhoods have not evolved with the changing nature of the region, and have been facing challenges.

Apartment Neighbourhoods lack one thing that many Toronto’s neighbourhoods take for granted: convenient access to local shops, services and amenities. They were built at a time when urban development was thought of differently: Residential, commercial, and institutional uses were planned to be a convenient drive from one another, but very separate. Toronto’s zoning by-laws reinforced this kind of design through single-use zoning – apartments in one area, shopping in another, and so on, with little or no room for change. That is why we see so few shops, cafés, grocers, community centres, etc. near Toronto’s towers

Today’s tower residents are not typically car owners; they rely on walking and transit to get around. The car destinations of the ‘60s are therefore no longer within reasonable reach, and many neighbourhoods find themselves isolated, lacking the local shops, services, food, childcare, opportunities, and other ingredients of healthy neighborhoods.

Luckily, the time for change has come.

A group of partners including United Way Toronto, Toronto Public Health, the City of Toronto, and my organization, the Centre for Urban Growth and Renewal, have worked to replace the old zone with a new, more flexible framework. The result, known as the “Residential Apartment Commercial (RAC)” zone, will remove barriers to allow a range of small-scale businesses and community amenities, from pop-up markets and cafés to health services and urban agriculture. Apartment Neighbourhoods across the city can now begin the process of incremental change toward more integrated, vibrant, and diverse community hubs across the city.

The zone’s approval, however, is just the start. The next step is for landlords, residents, and communities to bring this potential to life. And this process has begun in a number of communities across the city, with a wide range of partners working toward providing active support to meet the promise of the RAC Zone. There is much work ahead, but this is an exciting time for Toronto. 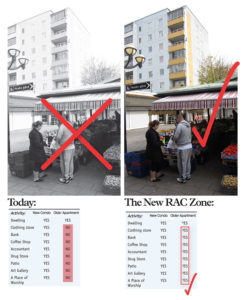