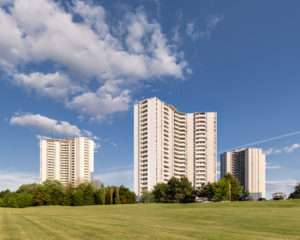 This week the Toronto Star features an article by Graeme Stewart of ERA and John Broadhead of Evergreen CityWorks on the momentum that’s building in Toronto around Tower Renewal. The article introduces the idea that the GTA has a unique urban and suburban form, with thousands of residential towers built in the ‘50s, ’60s, and ‘70s, housing nearly a million people.

The Tower Renewal initiative unites stakeholders across the city to reinvest in these aging tower neighbourhoods to bring to new uses, new activity, and eventually new construction and capital to the community. The aim is not unchecked development, but rather neighbourhood development for more energy-efficient, more vibrant, and healthier communities.

People all over the GTA have become involved in diverse ways in the Tower Renewal effort, including many City Councillors. But with Toronto’s municipal election fast approaching, which mayoral candidates will endorse the program and provide vision for the next four years?

Find out in “How to revitalize highrise rental housing neighbourhoods” in the Toronto Star online.

Photo by Jesse Colin Jackson, who has an exhibition of photos of Toronto Towers at Pari Nadimi Gallery until November 1, 2014.