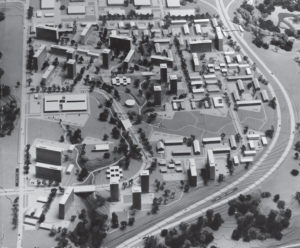 Toronto’s aging apartment neighbourhoods are not all the same. They are predominantly based on the idea of the tower-in-the-park; they have large simple tower blocks placed in abundant open space. But after that common denominator there are plenty of differences which provide each of these neighbourhoods with their own individual character.

The arrangement and location of apartment neighbourhoods throughout Toronto gives them a loose taxonomy. These include, though are not exclusive to, the subway nodal developments of Yonge and Davisville, Crescent Town, High Park, and St. Jamestown; the arterial clusters along the length of Eglinton, Bathurst and Jane streets; the nearly agrarian conditions found along ravine sites across the city from Mt. Dennis, to north Etobicoke; to the planned communities found along the length of the DVP, including the Thorncliffe Park, the Peanut, and Warden and Finch to name a few.

Each of these neighbourhoods have specific histories. For example, take a look at the master planned community of Flemingdon Park which is an attempt at a completely functional ‘new town’ as a counterpoint to typical sprawl. It was highly influenced by similar European efforts, particularly those found in Sweden and the United Kingdom. The result was the first privately developed apartment neighbourhood in North America, and introduced tower living to Toronto’s suburbs.

Planned in 1959 as a town of 14,000 people centred on apartment towers, Flemingdon Park was to be one of the most ambitious and inventive real estate projects in Canada. Directly influenced by Macklin Hancock, the designer of Don Mills, the master plan for Flemingdon Park focused on residential development and a lifestyle that would have the character and features of a viable small town. Coined a “complete community” by Hancock, the Flemingdon Park plan included residential, commercial, industrial, institutional, and park lands, as well as a full compliment of community facilities. The original scheme extended north of Eglinton and east to the Don Valley Parkway and featured the new headquarters for CBC Radio and Television, the area’s first motor hotel and integrated community service centre.Following the Master Plan and rezoning of the site, architect Irving Grossman drew up detailed plans for the first of several residential neighbourhoods within the master plan. He proposed a wide range of building types, from high-rise towers to courtyard houses to accommodate a variety of residents. Through this exercise in siting and design Grossman developed a unique architectural language that came to be recognized internationally for its innovative approach to residential planning and communal design. 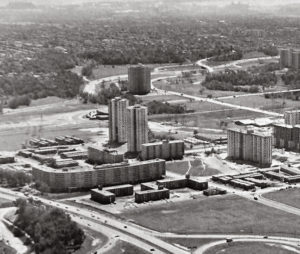 Flemingdon Park under construction, early 1960sAs years passed, Flemingdon Park has evolved into one of Canada’s most diverse yet impoverished neighbourhoods. While many aspects of Flemingdon Park’s master plan were unrealized, a reconsideration of the intentions behind the community’s original design can provide insight into opportunities for its revitalization. Understanding our neighbourhoods, understanding their differences and their unique histories, will allow us to better appreciate what we have as a built urban resource and how we can plan for the future.