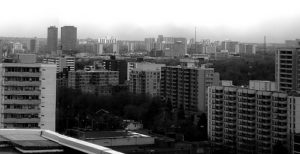 For Toronto, the most significant planning question may not be the form and placement of new density, but how to turn our enormous pockets of inherited high density into genuinely sustainable and complete communities.

The density of Toronto’s apartment neighbourhoods makes this city unique. In fact, surprisingly, Toronto has a denser metropolitan area than Chicago, Los Angeles, or even Greater New York City. Counter to popular belief, this is not the result of the city core, but rather thanks to distributed pockets of density found in apartment neighbourhoods such as Bathurst and Steeles, Yonge and Eglinton, or Thorncliffe Park found throughout the city. The towers at Kipling and Steeles for instance, give that neighbourhood a residential density nearly three times that of a traditional downtown neighbourhood like the Annex. Understanding how density works in our city gives us an almost counter-intuitive sense of urbanism. Density appears across the city.

But there is more to density. The Province’s Growth Plan proposes that density should be calculated as a combination of the number of residents and the number of jobs and recommends a target of 400 resident/jobs per hectare in urban growth centres like Toronto. The Plan doesn’t define an appropriate ratio but with the aim of promoting complete communities, it recognizes that neighbourhoods that work well have a mix of both a resident population and employment opportunities.

Comparison of neighbourhood densities in Toronto, people per hectare

In comparing neighbourhoods, we can see marked differences with this ratio. In the downtown core, streets like College in Little Italy and Bloor in the Annex provide their residential neigbhourhoods with restaurants and shops and diverse employment opportunities. But many apartment neighbourhoods, with their very large resident populations, lack the amenities and jobs that these inner city neighbourhoods have. Some could be characterized as employment deserts – all residents, no jobs. In other cases, such as Jane and Finch, a mix of uses was planned from the beginning and does exist as an aggregate, but on the ground it is characterized by single-use zoning, large underutilized spaces and a dependence on the car to get from place to place.

As cities throughout North America grapple with the challenge of sprawl, density is repeatedly stated as the answer. In this regard, Toronto is ahead of the game. The future of Toronto lies in its apartment neighbourhoods.