Data from CMHC, compiled by E.R.A. Architects and the University of Toronto

While Toronto’s current condo boom is the largest in North America, with 18,000 built last year across the GTA, it is dwarfed by the 1960’s post-war apartment boom. In 1968 alone 30,000 apartment units came on the market.

Contrary to common wisdom, the most significant legacy of modern suburbanization in Toronto is not the single family home, but multiple unit, high density dwellings. After the war, city planners and CMHC actively encouraged the development of modern apartment towers in the expanding region based on the tower-in-the-park typology. By the mid-1960s, at the peak of Toronto’s first mass housing boom, nearly 40% of the city’s housing stock and 77% of housing starts were apartments of this type. By the end of this boom, new “multiples” outpaced new single detached and semi-detached housing by a ratio of 2:1.

As a consequence, Toronto currently contains the second highest number of high rises in North America (defined in above graphic as buildings of 12 stories and higher, Emporis 2006), the majority of these residential towers of the post-war boom. Toronto is double that of third place Chicago. And while Chicago’s towers are overwhelmingly along the water’s edge and for the most part deal with a specific high-end demographic, Toronto’s towers spread north, south, east and west, as far as thirty kilometers from the city centre, housing a considerable portion of Toronto’s varied population. Undeniably, Toronto is a high-rise city, yet the distribution and age of the majority of our high-rise buildings gives Toronto a distinct character. We are fundamentally a different kind of city than our North American cousins. 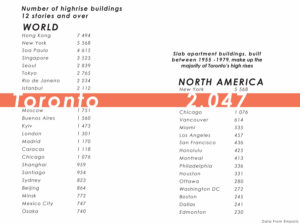 Data from Emporis (2006), compiled by E.R.A. Architects and the University of Toronto

We are much more than a city of quaint downtown neighbourhoods. Toronto is a city of towers, many of whom are approaching their fifth decade. This vast array of apartment towers and their associated communities are a legacy worthy of further study and thoughtful reinvestment.