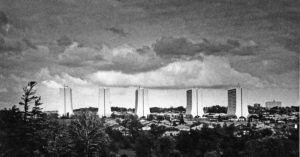 What makes Toronto unique? One of the least recognized answers to that question is that Toronto has more high-rise buildings than any other city in North America, outside New York. The majority of these are concrete modern residential towers, built in the post-war boom of the 1960s and 70s.

Following the war, when most North America cities began sprawling without order, Toronto’s Metropolitan Government implemented a regional plan. Municipal and CMHC housing policies supported high density as a means to provide needed rental housing and contain growth. For the form of this high density, they overwhelmingly favoured the model of the “tower in the park”. Subsequently, the suburban apartment became the most popular form of housing for a period of twenty years, representing the overwhelming majority of housing starts. Unique to their European and American counterparts, these apartment neighbourhoods, which sprang up throughout the GTA, were privately financed and marketed as modern homes for a growing middle class.

The result is a hybrid suburban form, where typical tract housing sits next to tower complexes more reminiscent of peripheral Moscow or Belgrade than the suburbia on this side of the Atlantic. Toronto may be the only City worldwide where seas on bungalows and modern towers make up the typical suburban landscape. 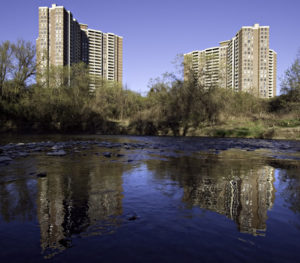 Towers at Kipling and Steels by the Humber River, photo by Jesse Jackson

Now, after four decades of service life, many of these structures and their associated communities, are in need of significant attention. Aging envelopes and mechanical systems make these towers one of the most energy inefficient housing type in the City. Their sheer number (some 1000 throughout the Toronto area) contributes significantly to the region’s carbon footprint. Additionally, there is a growing association of tower clusters with the City’s priority neighbourhoods – those neighbourhoods which are currently under-serviced and which require targeted investment. Rejected as failures of modernism, they largely exist outside the City’s planning, architectural and urban discourse.

Yet are these tower block communities, once considered among the City’s most progressive, a key inheritance for a sustainable future? Today’s planning mantra of ‘smart growth’ espouses high-density suburban growth as a cutting edge solution. Forty years ago this was standard practice in Toronto and led to its high-rise housing stock, with some clusters as high as 350 people per hectare. How might this inheritance be reengaged as a resource for the challenges of the 21st century city?

In response to this question, Mayor Miller will be bringing to Council this spring a report on the Tower Renewal Project – an initiative that combines dramatic cuts in greenhouse gases with community revitalization in Toronto’s apartment neighbourhoods. In the coming weeks, we will be providing brief segments on the Tower Renewal Project – its research, its partnerships, and its ambitions.