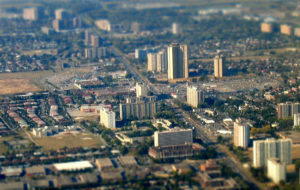 Aerial view of Jane and Finch, Courtesy of Lance Dutchak

Each area of the City has evolved with its own history. Take District 10 – the area we now know as Jane-Finch. The 1962 master plan proposed to transform the existing farm lots in the area into a complete community based on a set of principles that focused on employment, servicing, and social equity.

The basic form of the District Plan was a residential strip bisected by a ravine and bounded by industrial employment zones. Commercial areas were kept to major arterial intersections, with schools, community centres and park space at the interior of new communities. At the north edge of the district would be York University. Within this framework, the development guidelines encouraged flexibility and focused on:

– A minimum park space requirement of 1.25 acres per 1000 residents to be achieved by using ravine space or newly created parks;
– A balanced housing stock requiring a mix between rental and ownership, and providing family housing in low, medium and high densities;
– Integrated high density into low density areas through diversified housing types;
– High density if the development adjoined local parks, adjacent to a full range of community facilities within walking distance, access to transportation and the site could deal with the traffic created;
– Ravines as park space that should have pedestrian access at regular and convenient distances with a minimum distance of 800m from a park to any dwelling. 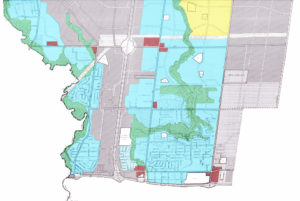 In the wake of the stark polarization emerging in contemporary American cities, Toronto proposed housing options for varying income groups. District 10 in particular featured a large social programme, with a series of innovative affordable housing communities with commendable designs by architect Irving Grossman and others.

High-rise housing became a particularly popular housing type in meeting the goals of the district. As a result, 60% of households are rentals, and 45% percent of housing units are high-rise, making Jane-Finch one of the areas in Toronto with the largest concentration of apartment neighbourhoods. 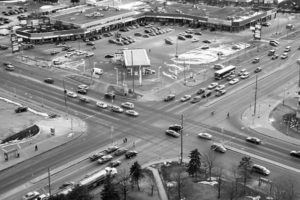 ‘Mixed-Use’ intersection of Jane and Finch.

How might it evolve to meet the needs of the contemporary context?

Today it is home to approximately 146,000 people, just above the 144,000 planned for the district. And the future? The first generation of settlement was the farms and the small rural agricultural communities that dotted the countryside. The second generation was the implementation of the District 10 Plan. But the area has changed remarkably little in terms of built form and while the underlying principles still remain relevant, the formal realization of these principles reflects 1960’s notions of scale and single use zoning. They don’t necessarily reflect the needs of the evolving community. Re-evaluating the original guidelines in today’s context will aid in creating a sustainable community for future generations.