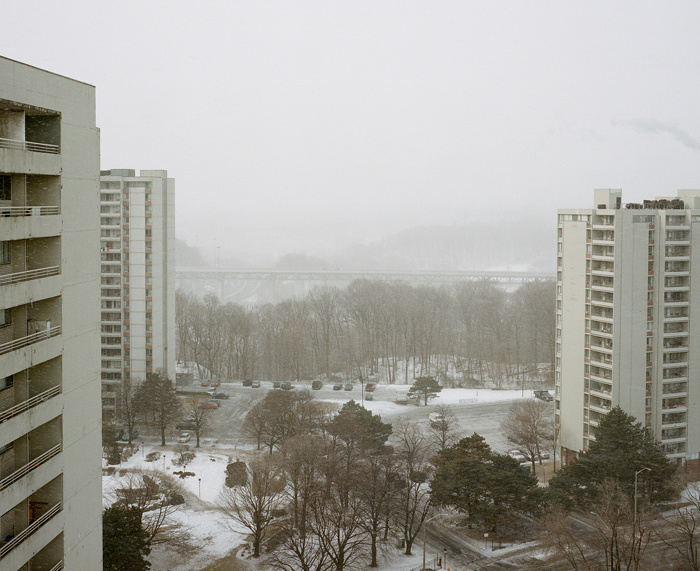 On view now at Harbourfront Centre is a new exhibition of photos by six photographers, including ERA’s friend Chloë Ellingson. Citing the Tower Renewal Project as one of its inspirations, Chloë’s work documents the topography of Toronto’s inner suburbs from the vantage point of various tower apartment buildings. Chloë’s full set of photographs can be viewed here.

Having grown up near the Don Valley, outside of Toronto’s downtown, Chloë has a personal interest in the image of the city we see from these perspectives. For those who spend a lot of time downtown, it’s easy to forget the sweeping hills, dramatic changes in grade, and green ravine systems just a stone’s throw away.

As the artist says, “Toronto’s landscape is not flat, and perhaps the people who know that best are those viewing the city from high-rise apartment towers. Along with a dense downtown core, there is significant density in the mid-century tower communities scattered on the periphery of the city.… Many of Toronto’s suburban high-rises were built alongside the ravines, creating a contrast in natural and human-made elevation that is wholly unique. It is this uniqueness that inspired my series for NO FLAT CITY.”

ERA congratulates Chloë on a fantastic show; we love seeing new perspectives of the GTA, especially those that ask us to rethink and re-contextualize the so-called suburbs.

No Flat City is on exhibition at Harbourfront for almost a year more, until June 1, 2015.