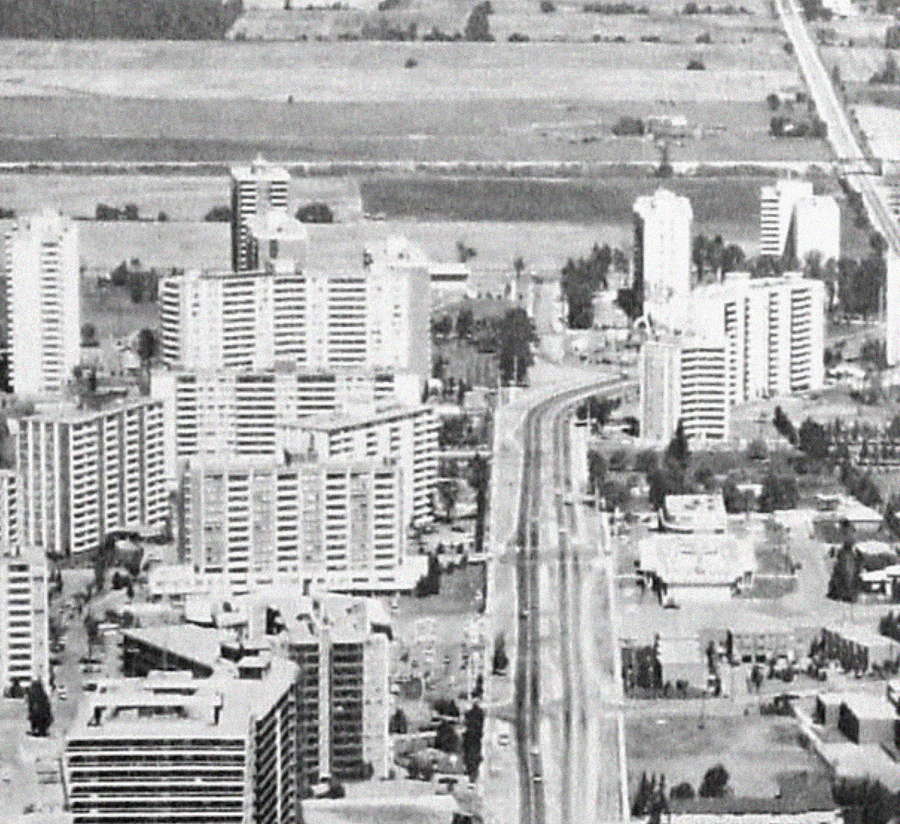 In the 1960’s, Steeles Avenue was the end of Metropolitan Toronto’s servicing area; the northern boundary of the region’s planned urbanization. North of Steeles, the rolling pastures were to remain as the area’s green belt, while in contrast, dense, mixed-use post-war communities emerged to the south.

Bathurst and Steeles emerged as a dense community containing nearly forty modern residential high-rises. Incorporated with the ravine, neighbourhood parks, elementary and secondary schools, churches and synagogues, shopping plazas and the cul-de sac’s of adjacent single family homes, the towers provided the bulk of housing for an area of over twenty thousand. 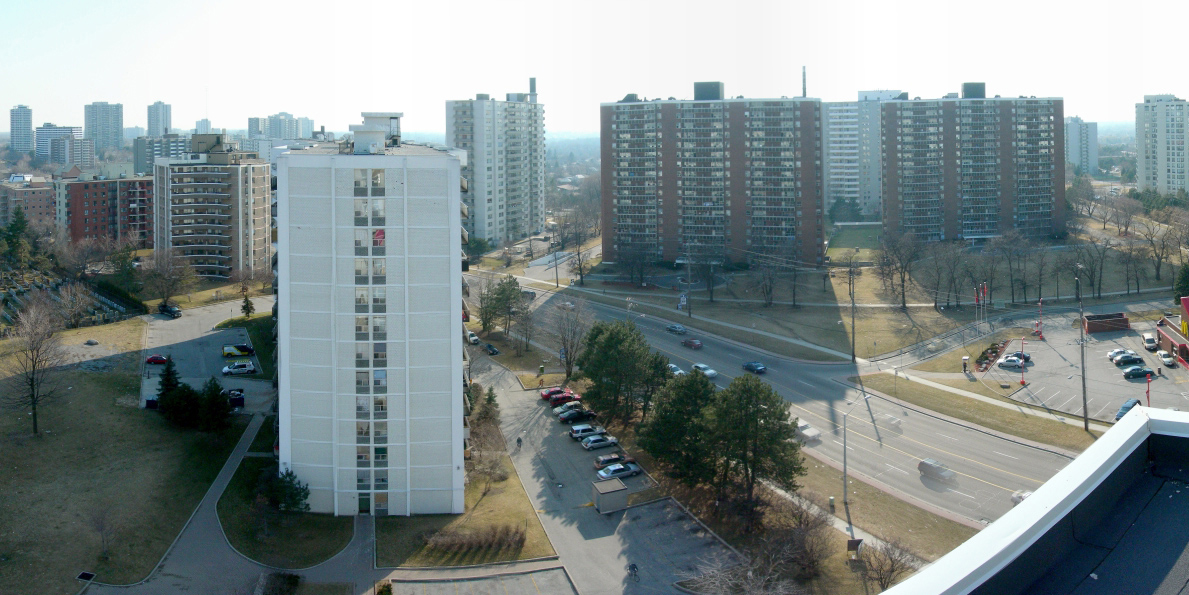 Unlike earlier master planned apartment neighbourhoods such as Thorncliffe and Flemingdon Park, the area developed property by property along Bathurst, following the set-back, open space and parking requirements for multiple storey buildings required by North York and Metro guidelines. Located adjacent to two large cemeteries, the large G. Ross Lord Park along the West Don River, and for a brief period of time a golf course, many of the area’s towers were truly planned as ‘towers in the park’. Others, located next to shopping plaza, were attempting mixed use.

Rich with Jewish heritage, the area was part of the northern expansion of Jewish Toronto along Bathurst. Beginning in the 1970’s and intensifying in the 1980’s, the area became home to Russian Jews fleeing the former Soviet Union. The collapse of the Soviet Union’s in the early 1990’s attracted a steady flow of Russian speakers of all backgrounds together with immigrants from other countries. Today the area remains one of the City’s most prominent immigrant receptions sites, as well as Russian communities. Cyrillic and Hebrew commercial signage and community newspapers display the current cultural mix.

The area was recently inaugurated as a Toronto literary landmark, setting the stage for David Bezmozgis’ remarkable collection of short stories; Natasha and Other Stories; documenting the struggles of a Jewish Latvian family coming to Canada in the early 1980’s. 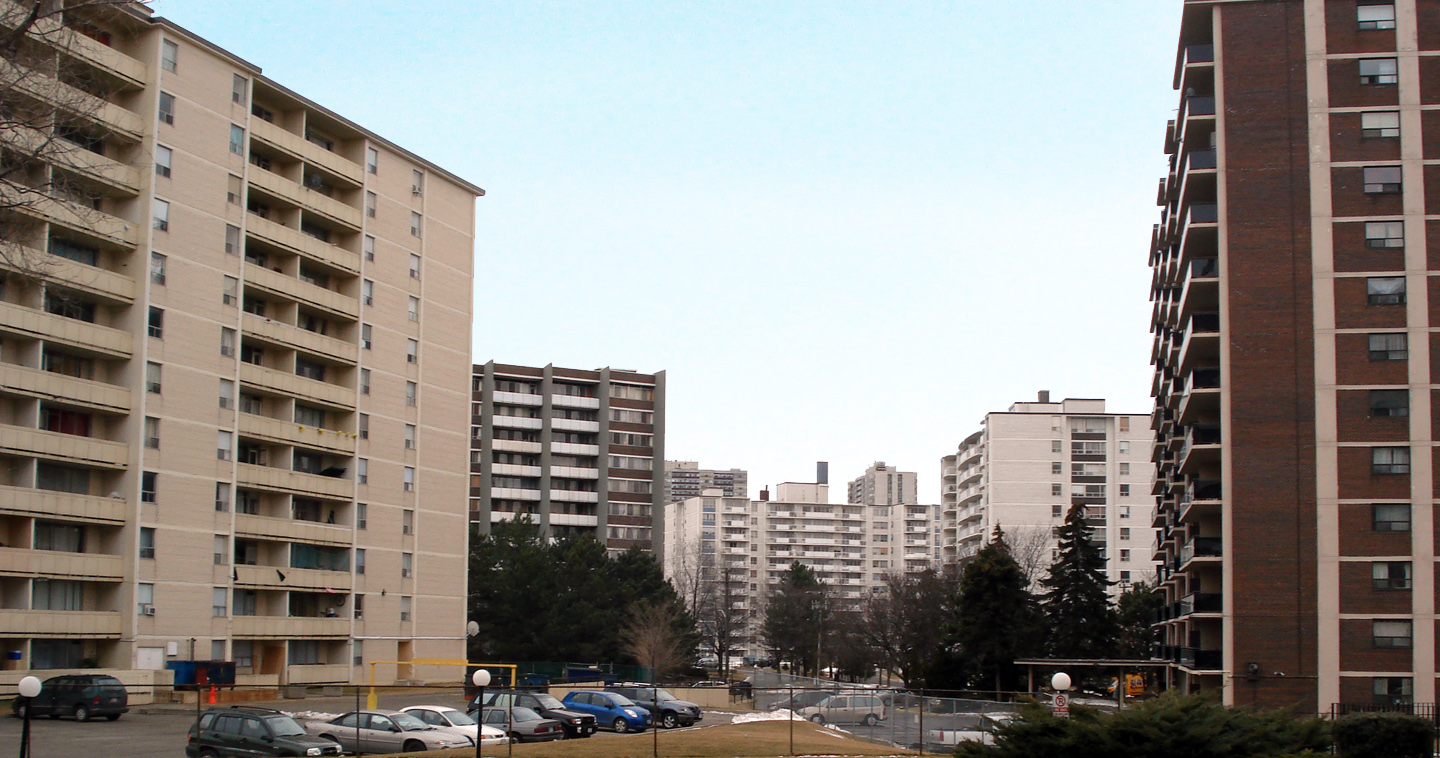 Many thousands live in Bathurst and Steeles forty modern towers

Yet despite its cultural vibrancy, Bathurst and Steeles is now considered a priority neighbourhood. Key concerns are a lack of community services; especially those for young children, single mothers, the elderly and integration into the work force for professionals trained in their homelands.

In terms of built form, aside from the addition of newer residential towers, the area has changed remarkably little; dominated by large underutilized and isolated apartment properties, now in varying states of ill repair.

North of Steeles however has changed dramatically. With the abandonment of the greenbelt, York Region emerged as an area of explosive growth beginning in the 1980’s; bringing low-rise, low density suburban expansion north to Thornhill, Newmarket and beyond.

In contrast, Bathurst and Steeles remains a bold precedent for ‘smart growth’ in the context of post-war planning; an attempt of high density, mixed income, and mixed use neighbourhood at the urban edge; an experiment which has in many ways been successful. Given the tools to respond to the opportunities and challenges of its current context, with re-investment the area could become a leading example of a sustainable and equitable community, and continue to be one of Toronto’s most unique neighbourhoods.

Written by Graeme Stewart, and Michael McClelland with Marsha Kelmans. This article first appeared in Novæ Res Urbis (NRU). ERA is contributing articles to NRU on a weekly basis about the Toronto Tower Renewal project.

Marsha Kelmans is a graduate architect and urban designer with the City of Toronto.