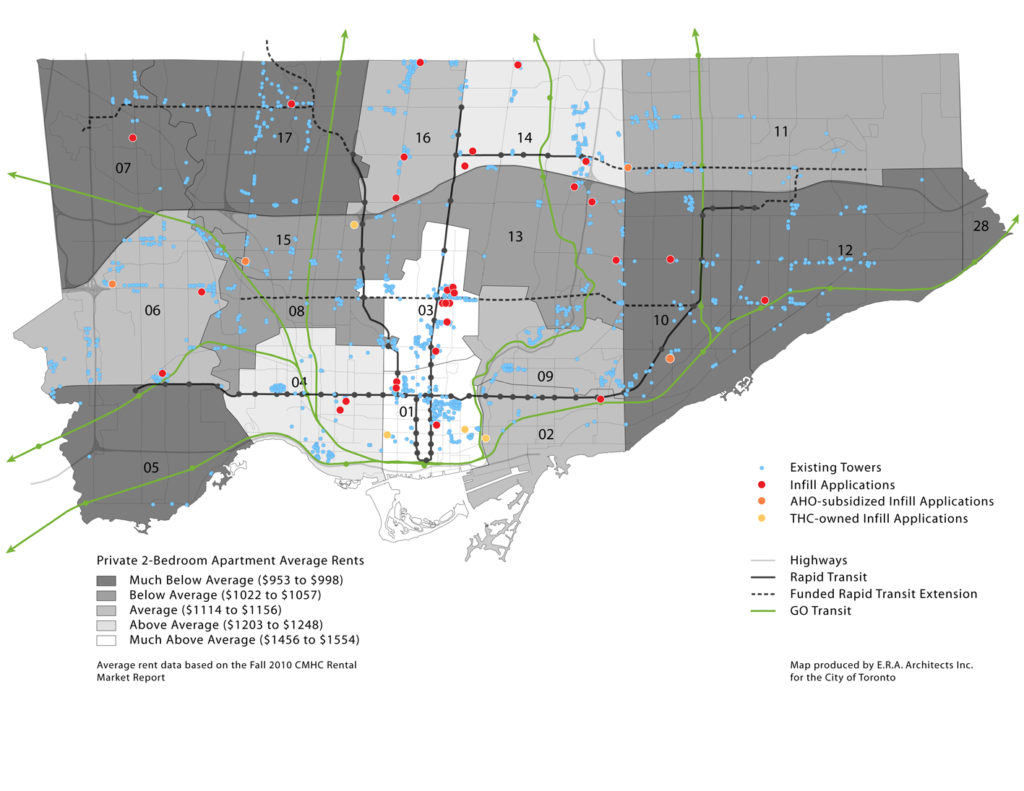 In March 2012, the City of Toronto released the report Apartment Infill in Toronto: A Ten Year Review.

This study examines Apartment Tower sites where new residential and mixed-use development has taken place, or is planned to take place, within their properties.

The report has found 39 such examples across the city.  These cases were cataloged by their location, number of built or proposed units, tenure (condo or rental), and finally whether infill projects were developed as private market housing, private affordable housing, or Toronto Community Public Housing.

While many of these infill projects are located within tower clusters in the city’s traditional core and Yonge and Eglinton, the majority are spread throughout the former boroughs, with significant clusters in North York. Largely concentrated along transit lines, these projects perhaps anticipate an emerging trend as transit investment increases in the inner suburbs, and traditional development sites throughout the city become scares.

Collectively, Apartment Neighbourhoods contain many hundred hectares of land throughout the City. One of the pillars of Tower Renewal is optimizing the utilization of this land to provide community amenity; shops; active meeting and recreation space; connections to the neighbourhood, and new housing. Through the right mix of new uses and amenities, Apartment Neighbourhoods can emerge as more complete, sustainable and vibrant communities. (Examples of site diversification can viewed in the previous post “Learning from Europe“).

The emerging interest in Tower infill presents an opportunity to develop policies that incentivize and encourage high quality and thoughtful developments to help achieve these goals.

While infill development on its own is not a panacea for Apartment Neighbourhood revitalization, it is a key tool for neighbourhood renewal; providing new uses, new housing choice, direct site investment, and with thoughtful planning and community partnership, perhaps more.