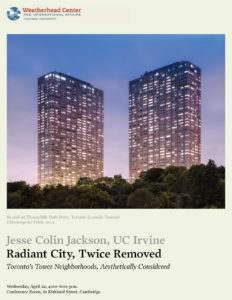 Our friend Jesse Colin Jackson will be speaking at Harvard this April on his photographs of Toronto’s towers. Jackson’s images invite the audience to consider these conflicted sites, and have had an important role in changing the status of apartment towers in Toronto’s collective consciousness. If you’re in the Boston area, we recommend the talk.

Jesse Colin Jackson is a Canadian artist based in Southern California. His practice focuses on object- and image-making as alternative modes of architectural production, appropriating and manipulating the images, forms, and conceptual apparatus found in the human landscape. Jackson has received project funding from the Social Sciences and Humanities Research Council of Canada, the Centre for Innovation in Information Visualization and Data Driven Design, the Digital Media Research and Innovation Institute, and the Ontario Arts Council. He is a 2014 Hellman Fellow at the University of California, and was a 2008 Howarth-Wright Fellow at the University of Toronto. Jackson is an assistant professor in the Claire Trevor School of the Arts at the University of California, Irvine; he taught previously at the University of Toronto and OCAD University. Jesse Colin Jackson is represented by Pari Nadimi Gallery in Toronto. His most recent solo show received a full-page review in The Globe and Mail.