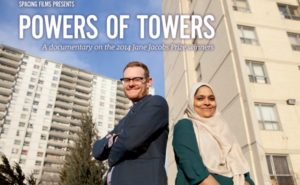 ERA’s Graeme Stewart and Sabina Ali of the Thorncliffe Park Women’s Committee are featured in a terrific new video by Spacing. The video, which also includes interviews with ERA’s Michael McClelland, is entitled “Powers of Towers,” and profiles the efforts of Graeme and Sabina to transform Toronto’s aging suburban high-rise neighbourhoods into livable communities that work. Graeme and Sabina were jointly awarded the 2014 Jane Jacobs Prize, also presented by Spacing magazine.

For several years, Graeme has been leading big-picture strategic thinking for Tower Renewal in Toronto. This has involved a range of street-level research, analysis, and consultation, as well involvement in city-planning initiatives and policy change. Since 2008 Sabina has been leading  her community to create new ways of using the public space, literally transforming their neighbourhood at an inspiring pace.

Watch the full video below:

“Powers of Towers” is presented in association with Tangent Motion Pictures and Foxley Films. Financial support was provided by the Ontario Media Development Corportation.