Beginning in early July, six youth from the Kingston-Galloway-Orton Park community were hired for a five-week period by the East Scarborough Storefront to continue work on a series of community-oriented landscape improvements. These features were designed as part of the Community Design Initiative (C.D.I.) program, to which these youth have previously volunteered hundreds of hours.

In our last week on site the team is in the process of creating a 15×50 ft. deck that will be placed underneath a green-roof pavilion known as the Sky-O-Swale, which the youth have had a hand in designing in previous sessions of the C.D.I.  program. The deck will be formed by a total of thirty 5×5 ft. modular decking segments which will eventually be pieced together. For the construction of the Deck alone, the youth have made over 700 cuts to roughly 500 pieces of wood. We have developed some real skills throughout the duration of this project and have a lot to show for it! 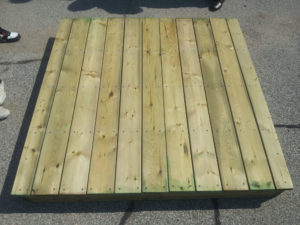