As of October 2016, five hundred tower neighbourhoods acquired the ability to re-conceive the social and economic character of their communities. Ontario’s apartment tower neighbourhoods help give the region an urban form unique to North America, reflecting progressive ideas that were considered “smart growth” in post-war Canada. While built with progressive ideas about density and suburban growth, they lack key features that many neighbourhoods take for granted: convenient and walkable access to local shops, services, amenities and the broader opportunities of neighbourhood life. This has largely been a result of single-use residential zoning. As a result, many tower neighbourhoods, home to thousands, are struggling.

A group of partners, including United Way Toronto, Toronto Public Health, the City of Toronto, and the Centre for Urban Growth + Renewal, have worked for several years to replace the old zoning category with a new, more flexible framework. The result, known as the Residential Apartment Commercial (RAC) zone, will remove barriers to allow for a range of small-scale businesses and community amenities, from pop-up markets and cafés to health services and urban agriculture. Apartment Neighbourhoods may now begin the process of incremental change toward more integrated, vibrant, and economically diverse communities across the city.

The Tower Renewal Partnership co-hosted the RAC Implementation Roundtable on October 19, 2016, with United Way Toronto and York Region. The roundtable assembled key stakeholders, including social service agencies and community organizations, to provide insight into how the RAC zone might be implemented across the city.

The workshop focused on four core challenges facing RAC zone implementation, including process obstacles, landlord uptake, market uptake, and outreach & capacity development. Each area was discussed in relation to three key sectors: nonprofit, entrepreneurial, and public. Following the establishment of the RAC Zone, a process of engagement, pilot testing, and process development will follow in 2017.

To learn more about the RAC zone, visit: http://www.raczone.ca. 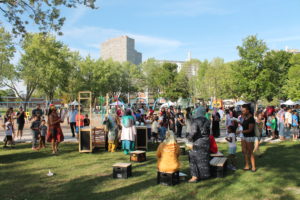