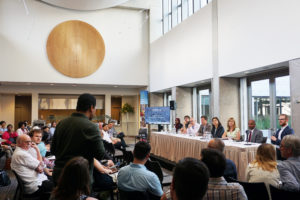 On Wednesday, July 19th, leaders in the development of Toronto’s Residential Apartment Commercial (RAC) Zoning by-law gathered at York University to celebrate and explore challenges and next steps in empowering communities to utilize Toronto’s newest zone. The esteemed panel had representation from property owners, entrepreneurs, community members, academics and city builders with Graeme Stewart, Principal at ERA Architect and the Centre for Urban Growth and Renewal as the Panel Moderator.

The evening provided a platform for the celebration of Toronto’s new Zone as well as a discussion about the next steps in rolling out the RAC Zone on a large scale.

For coverage of the event see:

Forget laneway housing. This is the Toronto re-zoning story of the year. https://t.co/sY98Tazq2D

Great, patient leadership of @ERAArch @GraemeJStewart to advance the vision of Tower Renewal in the city. Break thrus coming. @metromorning

I'm speaking tonight at what may be the 1st ever "party" to celebrate a new zoning bylaw … and people are actually here! #toronto #RACZone pic.twitter.com/cugTdchvEa

A meeting on the" Residential Apartment Commercial (RAC) Zone" might sound like very nerdy urbanism, but here's proof that zoning matters: pic.twitter.com/MshYA1ufMq