The National Housing Strategy (NHS) is a once-in-a-generation commitment to building and renewing affordable housing in Canada. Released in November 2017, the strategy supports and enables many of the key goals of Tower Renewal, with a focus on housing rehabilitation toward healthy, high-quality, low-carbon outcomes across both publicly- and privately-owned buildings.

Specifically, the NHS aims to rehabilitate 240,000 existing affordable rental units, which in turn will meet energy and performance targets set by the 2050 Climate Change plan.

The Tower Renewal Partnership was active in the consultation phase of the strategy, advocating for a focus on preservation of the crucial postwar tower housing stock, and on enabling its transformation through deep retrofits toward more healthy and resilient housing, while maintaining its affordability. The NHS, as announced, targets all of these goals.

Other jurisdictions have catalyzed the transformation of their housing sectors through thoughtful policy and strategic investment. One such example is Germany’s KfW Bank, whose programs have enabled the retrofit of hundreds of thousands of households; removed over seven megatonnes of carbon from the German building stock; and helped kickstart the green building economy. The National Housing Strategy now sets the stage for similar opportunities here in Canada.

The NHS proposes several new housing investment tools, including the Co-Investment Fund. Through provincial partnerships, the Fund will allocate $15.9 Billion toward meeting stated national housing objectives which include affordability, social sustainability, and climate resilience. This is truly a game changing proposal for Canadian housing.

As the NHS enters its design and implementation phase, the Tower Renewal Partnership is pleased to continue to support this work through ongoing research in retrofit finance models and best practice. 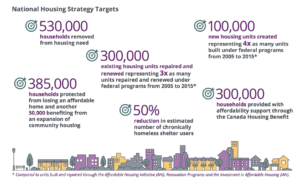