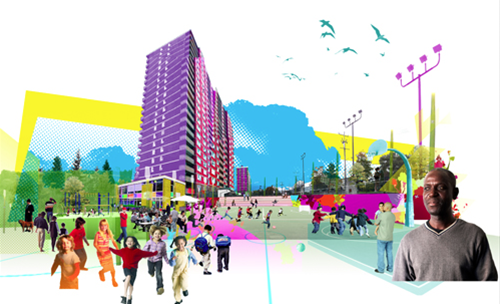 As part of ongoing work on Tower Neighbourhood Renewal, the Centre for Urban Growth and Renewal (CUG+R) has been working with partners United Way Toronto and the City of Toronto to establish a new approach to zoning that will enable Toronto’s hundreds of Apartment Neighbourhoods to emerge as more complete and better-served communities.

This work has recently taken a significant step forward, as Toronto’s Planning and Growth Management Committee has endorsed a new zoning category: the “Apartment Residential Commercial” Zone (RAC), developed by the City of Toronto’s Zoning Division in partnership with CUG+R and United Way Toronto this past summer.

The endorsement of the RAC zoning category is an important first step for a new policy framework for healthier and better-served Apartment Neighbourhoods. In the coming months the zone will be further refined, and the Apartment Neighbourhoods to which it will apply will be selected through city-wide analysis and  input from community stakeholders.

This process of zoning reform coincides with the United Way Toronto’s commitment to direct investment in several demonstration sites across the City as part of their Strong Neighbourhoods Strategy. Working with community partners, this initiative will build capacity among local social innovators and entrepreneurs for real and sustained positive change in Apartment Neighbourhoods.

We commend the City of Toronto and United Way Toronto for their ongoing work and look forward to continuing our partnership moving forward.

Look for more news regarding Apartment Tower zoning and community reinvestment in early 2013.