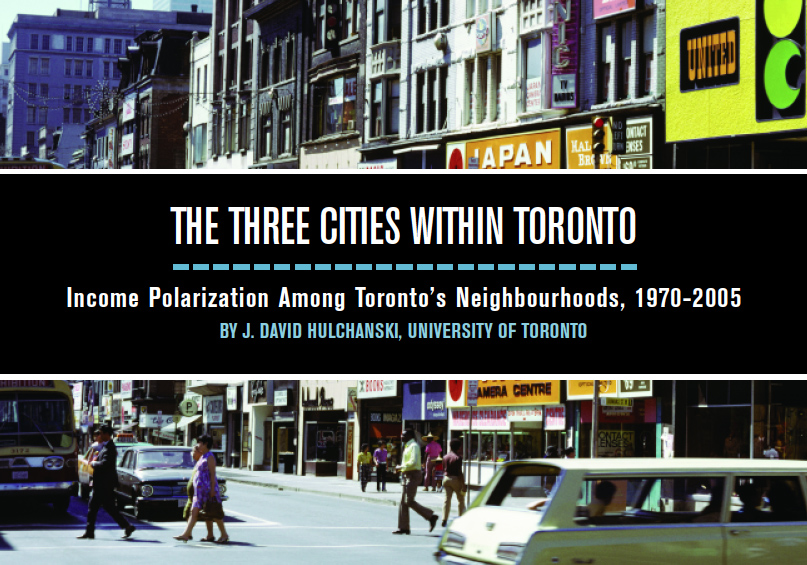 In late 2010, David Hulchanski published The Three Cities Within Toronto, a research update of his pioneering work related to income polarization in the city of Toronto.

Published in partnership with the University of Toronto Cities Centre, St. Christopher House, and the CURA Network, the book provides new projections based on the latest census data, and brings the analysis outside of the borders of Toronto to the wider region. The book also provides a more detail breakdown of areas of increasing poverty, including Apartment Neighbourhoods. (A previous post related to Tower Renewal and Three Cities can be found here).

According to the research update, the key steps for remediation this trend is to recognize and understand the current situation, and addressing it through public policy and targeted investment.

The book specifically notes that there is great opportunity for investment in the city’s aging Apartment Neighbourhoods. The full potential of these currently marginalized neighbourhoods could be unlocked through a policy framework that supports local enterprise and entrepreneurs, encourages a mix of use, and promotes new investment, such as new grocery stores, mixed-income housing and employment opportunities.

Other key recommendations note the importance of rapid transit as a catalyst to positive neighbourhood change.

The Three Cities Within Toronto Book was designed by Matthew Blackett of Spacing Magazine.