In 2008 the City of Toronto initiated its Tower Neighborhood Renewal program. The program looks at the significant impact of post–World War II construction in the city and proposes a plan for the rehabilitation of the many apartment towers that had been built during that period in the downtown core and inner suburbs. The scale and ambition of the project is large, and it represents an important departure from previous thinking that had placed little value on the conservation of buildings from this period. The intent of the program is to use the rehabilitation of this postwar building type as the catalyst for creating stronger, more sustainable communities. Recognizing that such a large-scale renewal amounts to a 20-year program, this paper provides an update on current progress.

“Reassessing the Recent Past: Tower Neighborhood Renewal in Toronto” was a combined effort between ERA’s Michael McClellan and Graeme Stewart and Asrai Ord featured in APT Bulletin: The Journal of Preservation Technology, Vol. 42, No. 2/3. 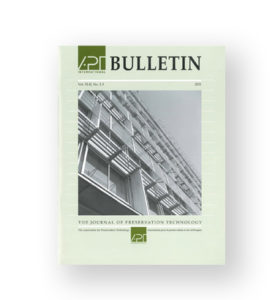