Toronto’s  mid-century Tower Neighbourhoods help give the region an urban form unique to North America, reflecting progressive ideas that were considered “smart growth” in postwar Canada. Yet while built with progressive ideas about density and suburban growth, they lack key features that many Toronto neighbourhoods take for granted: convenient and walkable access to local shops, services, amenities and the broader opportunities of neighbourhood life.  In fact, these features are not only missing in many of Toronto’s tower neighbourhoods, they are prohibited by zoning laws designed for another age. As a result, many tower neighbourhoods, home to thousands, are struggling.

The new RAC Zoning changes this, bringing neighbourhood zoning into the 21st Century. This new zoning changes the rules in nearly 500 tower sites, allowing for food markets, shops, small businesses, classes, community services, cafés and other initiatives, setting the stage for communities, social innovators, service providers and the city to work together toward creating more complete, convenient and healthy communities across Toronto. 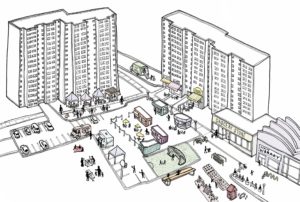