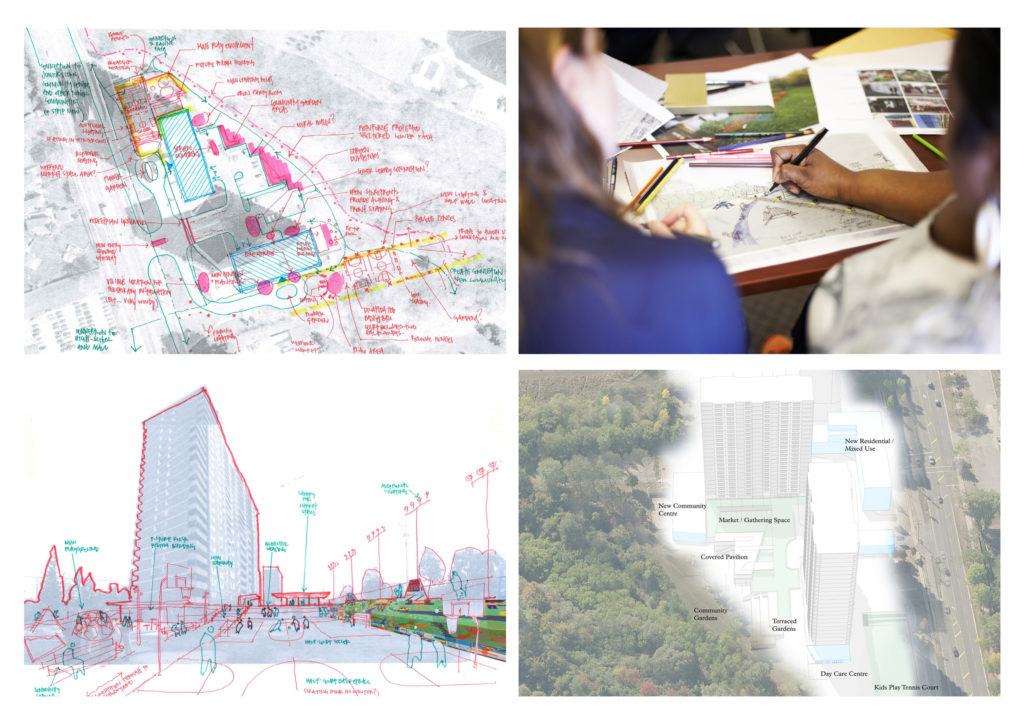 Above images by ERA and NFB with top right photograph by Jaime Hogge, courtesy of The National Film Board of Canada

For over a year, ERA and the Centre for Urban Growth and Renewal (CUG+R) have been working with the NFB on their remarkable HIGHRISE documentary series directed by Kat Cizek.

The series examines the current conditions and future potential of post-war high-rise living around the world. Features have included the One Thousandth Tower, Out My Window, and most recently the One Millionth Tower.

F0r the One Millionth Tower, the team worked with residents of the Kipling Towers Neighbourhood in North West Toronto, to understand the opportunities and challenges of the neighbourhood, and to dream big about the neighbourhood’s future. These ideas were then interpreted and brought to life by animators, web designers and the residents themselves.

The  project includes a series of  documentaries including the main feature – an experimental interactive documentary, as well as “Imagine”, documenting the collaborative production process, and “Living Proof”, showcasing international examples of Tower Renewal that ERA and CUG+R have toured over the years. These docs can be viewed below:

Congratulation to the NFB and its collaborators for developing this remarkable project.

For more information, visit highrise.nfb.ca. The official project statement of the One Millionth Tower can be found below:

One Millionth Tower re-imagines a universal thread of our global urban fabric — the dilapidated highrise neighbourhood. More than one billion of us live in vertical homes, most of which are falling into disrepair. Highrise residents, together with architects, re-envision their vertical neighbourhood, and animators and web programmers bring their sketches to life in this documentary for the contemporary web browser.

The result of this unique collaboration is a lush visual story unfolding in a 3D virtual environment. Visitors explore how participatory urban design can transform spaces, places and minds.

One Millionth Tower is “hyper-local” documentary. It’s hyper-local because it’s grounded in a particular community — a highrise on Kipling Avenue in suburban Toronto, Canada — where the HIGHRISE team has worked with residents for over two years. The project is a concrete result of a community collaboration between residents, architects, documentarians and animators to re-imagine the particular spaces around these particular highrises.

Yet it’s hyper-lobal, because so many of the hallmark problems that these residents face are found in highrise communities around the globe: deteriorating buildings; physical and cultural separation from the downtown core; poor access to social services and commerce; poor public transit and long-distance commutes, resulting in a reliance on cars and long travel times; little or no community play space for children; as well as no community space and fabric between the residential buildings themselves. One Millionth Tower suggests these problems can be solved — it just takes some imagination.

One Millionth Tower is a story with global implications about how, with the power of imagination, we can transform the urban and virtual spaces that belong to all of us.

One Millionth Tower is one of the world’s first HTML5/webGL documentaries.