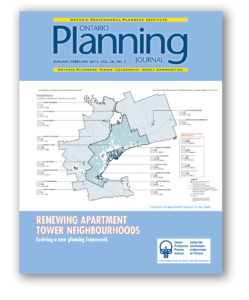 The newly proposed ‘Apartment Residential Commercial Zoning’, developed by the Centre for Urban Growth and Renewal, City of Toronto, United Way and other partners features as the cover story in the January / February 2013 issue of the Ontario Planning Journal.

The issue of the journal can be downloaded here.

A background to the development of the RAC zoning can be found here.