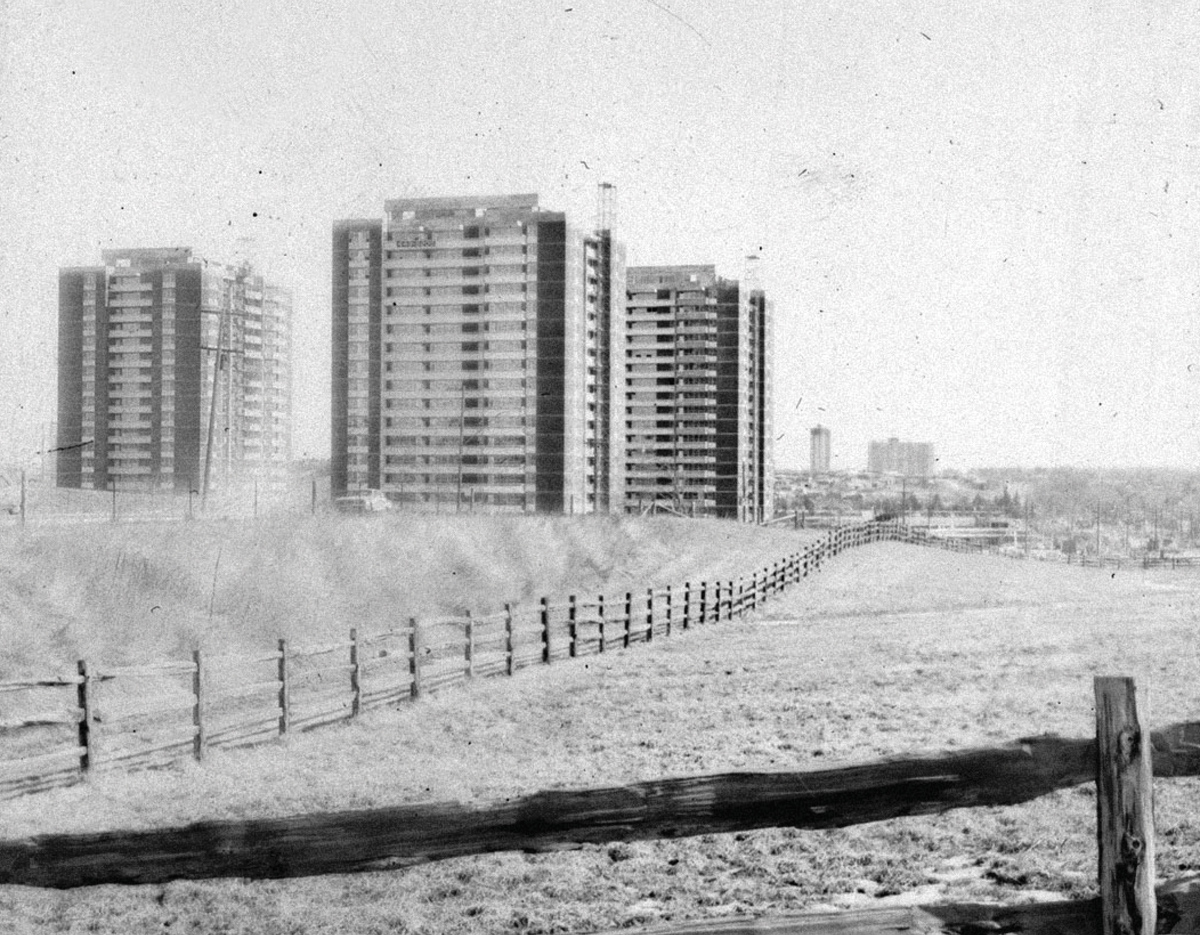 The idea of the tower in a genuine ‘park’ or ‘landscape’ setting was a popular notion after the Second World War. As a result, during the post-war boom in Toronto, a minimum of 60% open space around multiple dwellings was promoted as a best practice. If developers wanted larger buildings, they were to provide a greater ratio of open space to building footprint. The results are the large towers and 90% open space found across Toronto’s suburbs.

Today this land is not being used as planned. Shy of the recreation and amenity space envisioned, much of this open space is either surface parking or is simply fenced-off. Rather than park-like communities, high-rises generally sit as isolated islands. City-wide this represents in enormous and underutilized land resource. 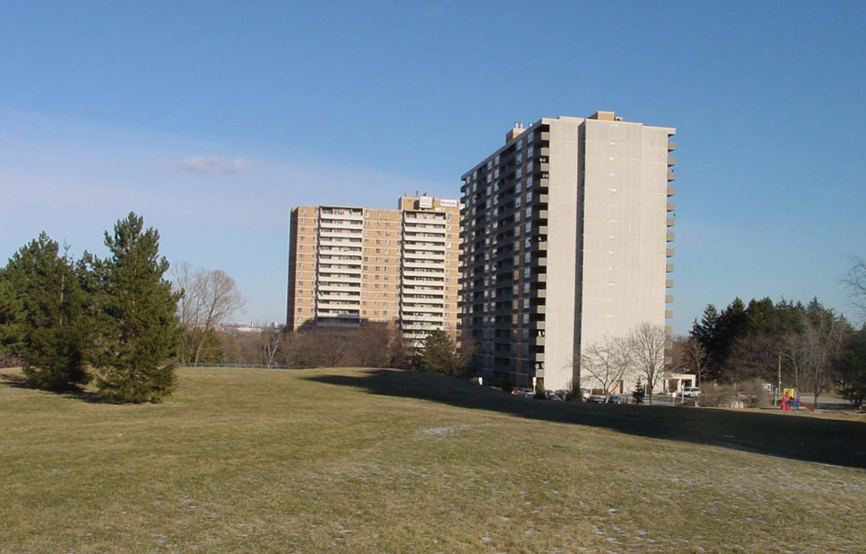 Vast apartment properties at Kipling and Steeles in north Etobicoke 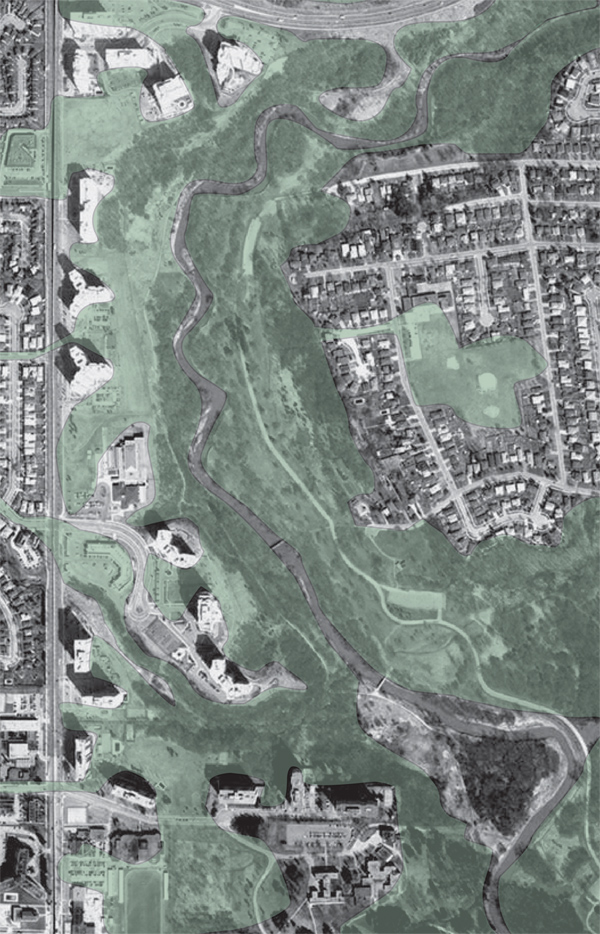 Take North Etobicoke’s Kipling and Steeles for instance; here nineteen towers house over thirteen thousand people. While this tower district adjacent to the Humber Valley appears more pastoral than urban, most of its open space lays unused and inaccessible. What are the possibilities? There exists a multitude of options for site renewal, yet how might the landscape itself be engaged? In addition to providing much needed active and useable pedestrian space, a simple response is urban farming. If we look to other successful examples like London for instance, urban farming has had a strong presence since the 1970s. Many of the sites in the Farm Garden UK Network are integrated into tower blocks and Council Housing – complete with livestock – these farms provide training for children as part of local school curriculums, as well as community kitchens and seasonal markets. In China urban agriculture now feeds one third of the population. 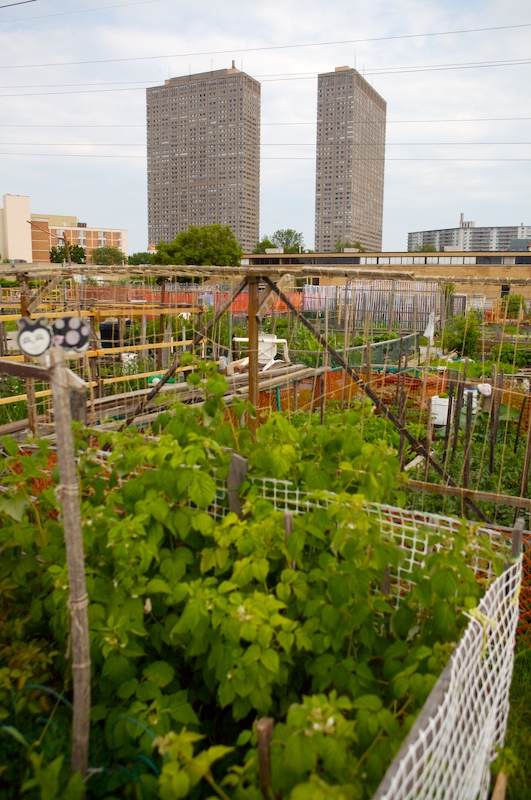 In many ways, Toronto is already a leader in community gardening through initiaties such as Foodshare, yet our local food production still only accounts for a small percentage of that consumed. The abundant fertile land found in many apartment neighbourhoods, only a generation removed from agricultural use, are ideal sites for food production. Tied in with compost programs and farmers markets, current no-man’s-land could be rendered productive, self sufficient, and the focal points of diverse communities. Applied at a City scale, these initiatives could have a significant impact on consumption patterns, resource management, and green house gas production, as well as providing ready access to local food. Perhaps today we can achieve the ‘tower in the landscape’ appropriate to the twenty first century context.

Written by Graeme Stewart, and Michael McClelland with Hélène St. Jacques . This article first appeared in Novæ Res Urbis (NRU). ERA is contributing articles to NRU on a weekly basis about the Toronto Tower Renewal project.

Hélène St. Jacques is the president of Informa Market Research, a recognized social marketing expert working with communities across Canada on health, food and environmental issues. She is also a board member of Toronto’s FoodShare.